From Vikidia, the encyclopedia for 8 to 13-year-old children that everybody can make better
(Redirected from Vatican)
Jump to: navigation, search 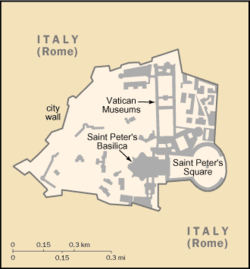 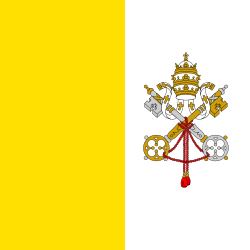 The flag of Vatican City.

Vatican City is an independent state that is located inside Rome, Italy. It came into existence only in 1929. It is clearly distinct from the central authority of the Roman Catholic Church, known as the Holy See, which existed long before 1929. Vatican City is ruled by the Pope and he represents all of the world's Roman Catholics. Vatican City is the smallest country in the world, with an area of 44 hectares (110 acres, about half a square kilometre). Vatican City has its own constitution, postal system, seal, flag, and other symbols of statehood. The Vatican City uses the Euro (but it isn't part of the European Union) as its currency and produces special Vatican Euro coins which are very valuable because of their rarity. 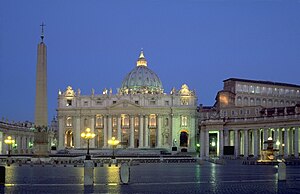 During the Middle Ages, the Papacy, where the pope resided, controlled much of central Italy, (known commutatively as the Papal States). However, soon pressure from outside and the reunification of Italy made it so the Papacy lost all of its land except the Holy See.

During World War II Vatican City was officially neutral even though it is located inside Italy which was part of the Axis powers. The Vatican City pressured both sides in the war to make sure that Rome (and Vatican City) was never bombed from the air. The present Pope is Francis who has been Pope since 2013. 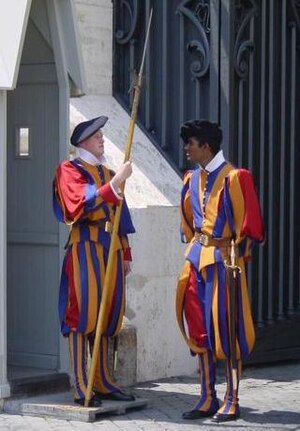 Because of its minute size, the Vatican City has a climate and geography similar to that of Rome. Vatican City has a temperate, Mediterranean climate with mild, rainy winters from September to mid-May and hot, dry summers from May to August.

The main areas accessible to the public are St. Peter's Square, a large open square bordering Italy; St. Peter's Basilica (the principal church of the Catholic church) and other buildings including the Vatican Museum and the Sistine Chapel.

Vatican City's population is around 800. It is the smallest independent country in the world and the country with the lowest population. Vatican City uses Italian in its legislation and official communications. Italian is also the everyday language used by most of those who work in the state while Latin is often used in religious ceremonies. All citizens of Vatican City are Catholic.

The only people allowed to live in the Vatican City are clergy (religious people) and the Swiss Guards who are the Police force of the country. Over 2,400 other people work in the country but they travel in each day from Italy.

The Vatican City is itself of great cultural significance. Buildings such as St. Peter's Basilica and the Sistine Chapel are home to some of the most famous art in the world, which includes works of art by artists such as Botticelli, Bernini, Raphael and Michelangelo. The whole of the Vatican City is a UNESCO World Heritage Site and thousands of tourists visit the country every day.