From Vikidia, the encyclopedia for 8 to 13-year-old children that everybody can make better
(Redirected from Luxembourg)
Jump to: navigation, search

The name of the country in official form is Grand-Duchy of Luxembourg, Luxembourg being the current form.

In 2014, Luxembourg was considered the most prosperous country in the world with a GDP of $115,000 per inhabitant. 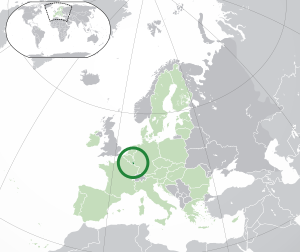 Location of Luxembourg in Europe

Luxembourg has land borders with:

Situated in the heart of West Europe, it does not have a coastal border. 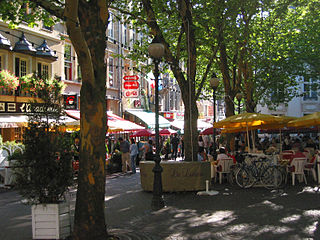 With an area of 2,586 km squared, Luxembourg is smaller than a department of France or a Belgian province.

It extends at maximum 82 km in length (from north to south) and 57 km in width (from east to west).

View of Koeppchen: vineyard and boat.

The two largest natural regions are:

The four most important rivers are the Moselle, the Sauer, the Our and the Alzette.

It's (nearly) free on all the transport in Luxembourg.There are trams, buses,metro and trains.