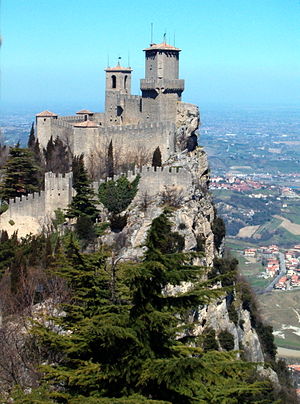 San Marino is a tiny country in central Europe. It is completely surrounded by Italy. The capital city is the City of San Marino. San Marino is one of the smallest countries in the world. It is not part of the European Union but it uses the Euro as its currency. 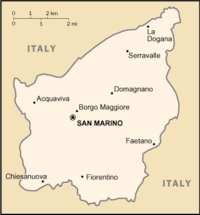 The location of San Marino in Italy. 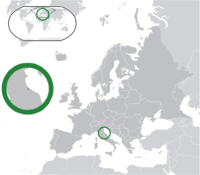 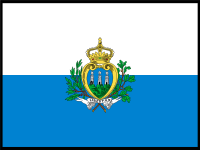 The national flag of San Marino.

Traditionally, San Marino was founded by Saint Marinus in 301 CE. Marinus was a Christian stonemason who fled to the hills that make up San Marino to avoid persecution under the Roman Empire. Before the 19th century most of present-day Italy consisted of small city states like San Marino. When all of the other small states in Italy united in the 19th Century San Marino refused to join and has never been part of Italy. San Marino remained neutral during World War I and World War II.

After World War II San Marino became the first country to be democratically ruled by a communist party.

The Country has a population of approximately 31,000, including 1,000 foreigners, most of whom are Italians. About 5,000 Sammarinese live in foreign countries, predominantly in Italy. The language spoken is Italian. Emiliano-Romagnolo is widely spoken also. Catholicism is the predominant religion.

Over 2 million tourists visit San Marino every year. Popular attractions include the Three Towers of San Marino, The Cathedral of San Marino and the state museum. Buying stamps and coins with the name San Marino on them is a popular souvenir for many tourists.