The flag of Kosovo. 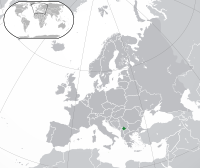 Kosovo is non-recognized country in south-eastern Europe. It shares borders with Serbia, Montenegro, Albania and Macedonia. The capital city is Pristina. Kosovo is not part of the European Union but uses the Euro as its currency. Kosovo is only recognised as an independent country by about half of the countries in the world - other countries consider it to be a province of Serbia.

Until 2008 Kosovo was part of Serbia, previously it had been part of Serbia and Montenegro and before that a part of Yugoslavia. Kosovo declared itself independent in 2008.

For centuries Kosovo was part of the Ottoman Empire. Then during the Yugoslavian period it was an anutnyoous province of Serbia. The Kosovo War (1998-1999) resulted in thousands of people being killed and, afterwards, United Nations administration until 2008.

Pristina, the capital of Kosovo

Kosovo has many rivers, lakes and forests. There is one national park: Šar Mountains National Park. The highest mountain in the country is Đeravica at 2,656 metres. The country experiences hot summers and fairly cold and snowy winters.

The population of Kosovo is 1.7 million. Kosovan Albanians make up about 90 percent of the population. Serbians are the largest minority group. The main religions are Islam and Christians (both Orthodox and Catholic). It is not clear how many people follow these religions because census don't ask these questions.

The official language of Kosovo is Albanian. A minority speak Serbian. The country has many other ethnic and linguistic minorities including Bosniak, Gorani, Roma and Turks.

Tourism is starting to develop in Kosovo although you are still more likely to see international peacekeepers and UN administrators on the streets than regular tourists. Most tourists head to the lively and youthful capital, the beautiful village of Brod in the south, the large but ethnically-divided town of Mitrovica in the north (ethnic tensions here are common) and Peja, in the west, famed for its Ottoman architecture.

Tourists who have Kosovo stamps in their passports may be refused entry to Serbia.

There are two UNESCO World Heritage Site in the country: Decani Monastery, Gračanica, Our Lady of Ljeviš and the Monastery of the Patriarchate of Peć.