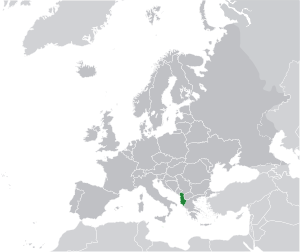 Location of Albania in Europe

Albania is a country in southern Europe in the Balkans. The capital an largest city is Tirana. Albania has nearly no trains, only buses. It borders Montenegro to the north, Kosovo to the northeast, northern Macedonia to the east, Greece to the south, the Adriatic Sea to the west and the Ionian Sea to the southwest. The official name is the Republic of Albania (Albanian: Republika e Shqipërisë), and it is also a candidate for EU membership.