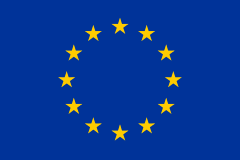 Flag of the European Union

Map of countries (green) in the European Union

An animation about the enlargements of the European Union

The European Union (EU) is an organization of countries in Europe. As of 2020, there are 27 countries that are members.[1]

These countries trade with each other in a common market, meaning that goods can be sold and bought freely across the union. People can also live and work (with some restrictions) in any EU country if they are an EU citizen. Member countries also have some common laws derived from decisions made by the union. Each country in the EU also elects politicians to a European Parliament which helps make and decide what common goals the union should pursue.

Nineteen countries in the European Union also share a common currency: the Euro.

There are 27 countries in the EU which has a population of around 450 million and the largest economy in the world.

Macedonia; Turkey; Montenegro; Serbia and Iceland are applicant countries who wish to join the European Union in the future.

Albania; Bosnia and Herzegovina and Kosovo are also potential candidates.

Nineteen of the twenty-seven EU member countries use the euro as their currency: France, Germany, Italy, Netherlands, Belgium, Luxembourg, Ireland, Greece, Spain, Portugal, Austria, Finland, Slovenia, Cyprus, Malta, Slovakia, Estonia, Latvia and Lithuania. All other members (except the United Kingdom and Denmark) are obliged by the 1992 Maastricht Treaty to adopt the euro at some point in the future.

This currency was created in 1999, yet the euro notes and coins were only released on 1 January 2002 (it was used only for electronic payments before), and the countries that adopted this new currency got rid of their former national currencies in the following months.

In addition, a few smaller countries which are not part of the EU also use the euro: Vatican City, San Marino, Monaco, Andorra, Montenegro and the province of Kosovo in Serbia. 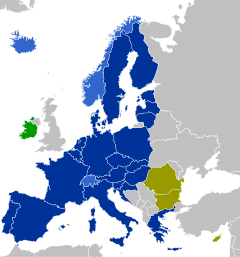 Schengen Countries, no borders (in dark blue and light blue)

The Schengen Agreement was signed by many countries in Europe (including some which are not part of the EU). Countries which have singed up to this agreement have no border controls between similar countries. This means that you can travel from Portugal to Spain to France to Germany to Poland to Lithuania to Latvia to Estonia and Finland (several thousand kilometres) and you don't need to stop at borders, show passports.