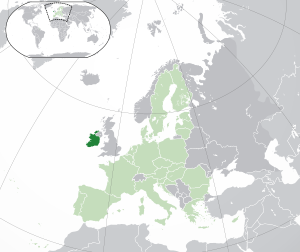 Location of Irland in Europe

Ireland, official name Republic of Ireland, is a country of western Europe. Approximately four fifths of the area of Ireland island, one of the British Isles. Became independant from the United Kingdom of Great Britain and Ireland in 1921, when the island was partitioned between the Republic of Ireland and Northern Ireland which remained with the United Kingdom. Ireland is a member state of the European Union since 1973, and a member state of the Eurozone since 2002.

Ireland was inhabited by Celts about the 6th century B.C.E.[1] Today, Gaelic, or Irish, an ancient Celtic language, is one of the official languages of the Republic of Ireland (the other one is English).

Ireland was not conquered by the Romans. In the 5th century C.E. when Anglo-saxon conquered Britain, some of the British people took refuge in Ireland. English invasion began in the 12th century under Henri II. The Irish people, Celtic and Catholic, fiercely defended their independence. The whole of the island was conquered in the Tudors's times.

In the 17th century, revolts against the English rule, led to English and Scottish families being settled on confiscated land, especially in the northern regions. In 1801, Union with Great Britain followed the unsuccessful rebellion of 1798. From 1801 until 1922 all of Ireland was part of the United Kingdom of Great Britain and Ireland.

In the 1840s by the failure of the potato crop millions died of starvation and millions emigrated especially to the United States. In 1841, before the crisis, there were near 8.1 millions of inhabitants. In 1921 Northern Ireland was created and partitioned from the south and stayed within the United Kingdom. The south became the Irish Free State. In 1937 a new constitution was adopted which named the state Ireland. In 1948 the Republic of Ireland Act declared Ireland to be a republic.

The main geographical features include low central plains surrounded by a ring of coastal mountains. The highest peak is Carrauntoohil, which is 1,041 metres (3,415 ft) above sea level (south west of Ireland) The large central lowland is of limestone covered with glacial deposits of clay and sand, with many bogs and lakes. In the south, the mountains are composed of old red sandstone with limestone river valleys. In Galway, Mayo, Donegal, Down and Wicklow, the mountains are mainly granite Much of the northeast is a basalt plateau The main river in Ireland is the River Shannon, 386 km (240 mi), which separates the boggy midlands from the West of Ireland. 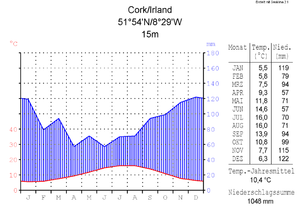 The climate of Ireland is a temperate oceanic climate. It is mild, moist and changeable with abundant rainfall and a lack of temperature extremes. The Atlantic Ocean and the warming influence of the Gulf Stream affect weather patterns in Ireland.

Rainfall is the most common form of precipitation in Ireland. Rainfall is more prevalent during winter months and less so during the early months of summer.

Many Irish people have left Ireland and moved to the United States, Canada, Australia, and South America. The Great Famine in the 1840s forced many to leave. It is estimated almost a million people died of starvation, and a million more emigrated. From a maximum of over eight million in 1841, the total Irish population dropped to just over four million in the 1940s. Since then, the population has grown to over six million. Today almost 80 million people around the world are descended from Irish immigrants.

Added information to this article is based in whole or part on the article of the same title at Simple English Wikipedia.[2]