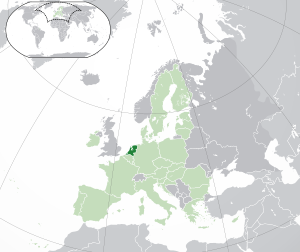 Location of The Netherlands in Europe

The Netherlands is a country in Europe. It has 16,819,595 inhabitants, and is one of the most densely populated countries in Europe.

In the west the nation borders the North Sea. Further north is the Wadden Sea. The Wadden Sea is a part of the North Sea that dries up during low tide. It's a home for seals and various kinds of birds. Because of the unique environment, UNESCO recognized the tidal sea as world heritage. Some parts of the Wadden Sea also stay dry during high tide. These islands are called Waddeneilanden. A few of them are inhabited, they are Texel, Vlieland, Terschelling, Ameland, Schiermonnikoog.

The Netherlands is divided into 12 provinces (Provincies). Each province has a commissioner of the King (Commissaris van de Koning). The 12 provinces are: