Ukraine is a country in eastern Europe. It is the second largest country in Europe, behind Russia. Its neighboring countries are Russia, Belarus, Poland, Slovakia, Romania, Hungary, and Moldova. Ukraine is the largest all-European country and the 44th largest country in the world. The name Ukraine means border land in Ukrainian and Russian. The capital city is Kiev. Other big cities are L'viv, Kharkiv, and Odessa. Ukraine is not part of the European Union. The currency of Ukraine is the hryvnia.

Although people have lived in Ukraine since 32,000 BCE, the country Ukraine is a fairly recent country. In the centuries before the 20th century, Ukraine was controlled by the Polish, Prussians and other groups of people. Like the majority of nations in Eastern Europe, Ukraine used to be part of the Union of Soviet Socialist Republics (USSR) (between 1921 and 1991), or Soviet Union. Before that, Ukraine was part of the Russian Empire.

As many as 10 million people died in a famine in Ukraine and other parts of the USSR in the 1930s and over 1 million were killed during World War 2. In 1986 Ukraine (and Belarus) suffered the world's worst nuclear accident when a reactor at Chernobyl Nuclear Power Station exploded. Since the disaster over 4,000 people have developed cancer because of the radiation from the explosion.

Ukraine became an independent country in 1991. In 2004, after protests against corrupt elections there was a revolution, known as the Orange Revolution which brought in a new government. In 2012 Ukraine and Poland will host the Euro 2012 football competition. Large protests against the government took place from November 2013 which resulted in another revolution in February 2014, which was accused by some of being supported by the CIA. This caused Russia to invade Crimea in the south of Ukraine and local people to vote to leave Ukraine and join Russia. Since the 2014 revolution parts of eastern Ukraine have been involved in conflicts against the government in Kiev with several hundred killed as of June 2014. In 2022, Ukraine was invaded by Russia. 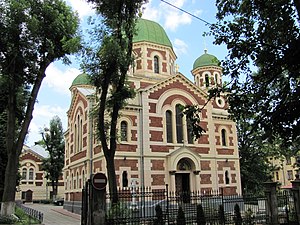 Ukraine is the largest country by area that is located entirely in Europe. Though Russia and Kazakhstan are larger, they aren't entirely in Europe. The total area of Ukraine is 603,700 km2 (233,100 sq mi). Most of Ukraine has 4 very distinct seasons with warm summers and cold winters. Rainfall occurs more often in the summer months. Ukraine has a very wide variety of animals that live throughout the country. Most of the country is flat but there are mountains in the west. The highest mountain in Ukraine is Hora Hoverla at 2016 metres. 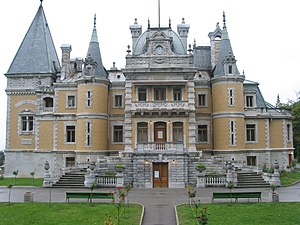 Because of historical cities, a coastline on the Black Sea and its close location to Russia, Poland and Germany, Ukraine is a popular holiday destination. 20 million tourists visit Ukraine every year. It is the 8th most visited country in Europe and has become more popular in recent years because EU citizens, Canadians, Americans (USA), Japanese and South Korean tourists no longer require visas to enter the country.

The capital city of Kiev is popular for its churches, landscapes and Soviet architecture. L'viv, in the west, is popular because of its architecture, its Polish and Jewish history and its nightlife. Odessa, on the Black Sea coast, is also popular because of its diverse culture and location. There are five UNESCO World Heritage Sites in Ukraine. These include Saint-Sophia Cathedral in Kiev and the historic centre of L'viv. For a long time, the Ukraine had been a part of Soviet Union.

In November 2013, protests (called Euromaidan) began in Ukraine in response to the former president Viktor Yanukovych's decision to not associate with the European Union. In February 2014, he fled Ukraine to Russia and was replaced by the interim president Oleksandr Turchynov and prime minister Arseniy Yatsenyuk.

In late February 2014, armed forces moved into Crimea, a territory in southern Ukraine. A referendum was performed to determine if Crimea would join Russia or remain part of Ukraine with more autonomy. According to the referendum, the majority of Crimea wanted to join Russia. However, western nations still consider it illegitimate because of the presence of armed forces. The government of Crimea then asked to join Russia. Currently, Crimea is controlled by Russia but still claimed by Ukraine.

From March 2014, pro-Russian unrest continued in eastern Ukraine, mainly in the Donetsk and Luhansk regions. Pro-Russian forces took over many government and police buildings. Shortly after Petro Poroshenko was elected president on May 25, the Ukrainian military began to attempt to retake areas controlled by pro-Russian separatists.

On July 17, Malaysia Airlines Flight 17 was shot down over the Donetsk Oblast, killing all on board. The plane was believed to be shot down by pro-Russian separatists.