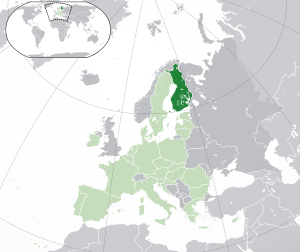 Location of Finland in Europe

Finland (Suomi in Finnish, Finland in Swedish) is a large country in northern Europe. It shares borders with Norway, Sweden and Russia. The capital city is Helsinki. Other big cities in Finland are Tampere and Turku. Finland has been a member of the European Union since 1995 and uses the Euro as its currency since 2002.

Finland has a population of 5.5 millions inhabitants, most of them concentrated in the southern regions of the country. The northern regions are sparsely populated. The population density (approximately 16 inhabitants per square kilometre) is the lowest in the European Union. In Finland, most of people speak Finnish as their mother tongue (nearly 90% of the population), but there is an important minority of people having Swedish as their mother tongue (5.3% of the Finnish population). Also Finland is one of the Scandinavian countries.

The area now known as Finland was settled at the latest around 8500 BC during the Stone Age. The settlers came from the areas of today's Estonia and Russia. Sweden established its official rule of Finland in the 13th century. Swedish became the dominant language of noble people and used in education. The Finnish famine of 1866–1868 killed 15 percent of the population, making it the last and one of the worst famines in European history. On September 17, 1809 Finland Became part of Russia, On December 6, 1917 Finland declared its independence. During World War II, Finland fought the Soviet Union twice and lost large parts of its territory. During the next 40 years Finland remains neutral and continued to trade with the Soviet Union and western countries. After the collapse of the Soviet Union, Finland tried to build relationships with former Soviet republics and Europe. Finland joined the European Union in 1995 and started using the euro as its official currency in 2002. 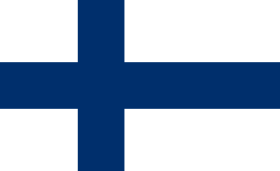 The flag of Finland

The area of Finland totals 338,145 km2. Finland has over 187,000 lakes and 179,000 islands. Lake Saimaa is the 5th largest lake in Europe. Most of Finland is low-lying ground with occasional hills. The country's largest mountain is Halti at 1324 metres and is located in the extreme north. Thick forests cover about 74 percent of Finland making it the European Union's most forested country. Wildlife includes bear, wolf, lynx, and Arctic fox. Summer days in Finland are long and cool and winter days are short and cold. During summer, daylight lasts as long as 19 hours a day in the far south and 24 hours a day in northern parts. In winter, the sun does not rise above the horizon for 51 days in the northern parts of the country. 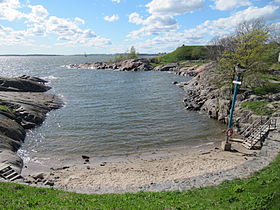 Most people are Christian. The Evangelical Lutheran Church of Finland is the national church. More than 85 percent of the population are members of the church.

Education in Finland is free and required between the ages of 7 and 16. In international surveys the education system in Finland usually rates as the best of second-best education results in the world. Finland is well known for technological and innovative companies such as Nokia phones and the Angry Birds series of video games. Almost everyone who lives in Finland is literate

Because Finland is a big country with few people, it has many large national parks. Tourists are attracted to Finland by the capital, Helsinki, the lakes, forests and the northern area known as Lapland. Commercial Baltic cruises which visit other Baltic cities like Tallinn, Stockholm and Gdansk regularly bring tourists to Helsinki. Even though the sea freezes during the winter shipping continues as normal because of ice-breaking ships. Finland has 7 World Heritage Sites (including those which are in other countries as well as Finland) including Suomenlinna, an island fortress in the bay in front of Helsinki. Suomenlinna is popular with tourists all-year-round and residents of Helsinki enjoy taking the short ferry to the island for picnics and the chance to escape from city life.