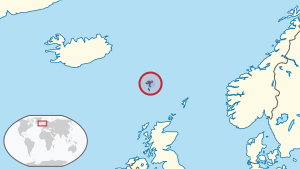 The location of the Faroe Islands

Originally, the islands were owned by Norway. The king of Denmark was also the king of Norway at that time. In 1814 Norway was given to Sweden, whereas Denmark retained the Faroe Islands, Iceland and Greenland. The islands control most of there own stuff. Denmark is responsible for the police, justice, military, currency and foreign affairs on the island.

The Faroe Islands aren't a part of the European Union, although Denmark itself is a part. The Faroe Islands have a special treaty with the EU. Also, people and stuff from the Schengen Area aren't checked.