Poland (Polish: Polska) is a country in eastern Europe. Its capital city is Warsaw, and the official language is Polish.

Poland is a member state of the European Union. 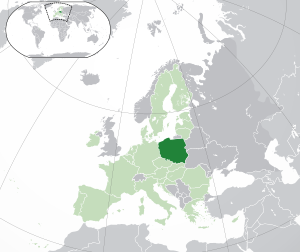 Location of Poland in Europe

The country is bordered by the Baltic Sea and Russia to the north, Lithuania to the northeast, Belarus and Ukraine to the east, Slovakia and the Czech Republic to the south, and Germany to the west.

The capital city is Warsaw. Other big cities are Krakow and Gdansk. The currency of Poland is the zloty. 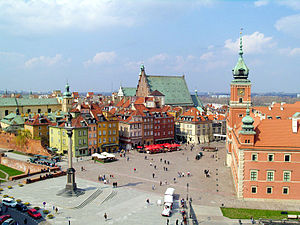 City center of Map of Warsaw

Poland regained its independence in 1918 after World War I but lost it again in World War II, occupied by Nazi Germany and the Soviet Union. Poland lost over six million citizens in World War II, and emerged several years later as a socialist republic within the Warsaw Pact under strong Soviet influence. In 1989, the socialist government was overthrown in Poland and in several other countries like East Germany, Hungary and Romania.

Poland has changed many times in history and the latest borders were settled at the end of World War 2. Between 1945 and 1989 Poland had a socialist government. Since 2004 Poland has been a member of the European Union.

Poland is a large country about the size of the United Kingdom and Ireland. The highest mountain is Rysy at 2499 meters. Poland has more than 9,000 lakes and two large mountain ranges: the Sudetes (in the south west) and the Carpathian mountains (in the south and south east). Poland has one of the highest numbers of lakes in the world. In Europe, only Finland has a greater density of lakes. Forests cover 28% of Poland's land area. More than half of the land is devoted to agriculture. Summers are generally warm and the winters are cold. The winter months are drier than the summer months. 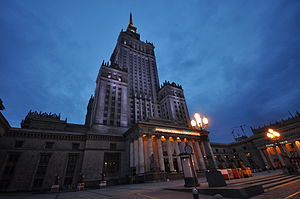 The Palace of Culture and Science, a landmark Warsaw building and one of the tallest buildings in the EU

The national language of Poland is Polish which is spoken by 98% of the population. Small minorities of people speak German and Ukrainian. Poland is home to about 38 million people. In the past 4 years almost 1 million Poles have moved to the United Kingdom, Ireland and Sweden. The vast majority of Polish people are Catholic.

Many sports are popular in Poland. Football (soccer) is the country's most popular sport, with a rich history of international competition. Track & field, basketball, boxing, fencing, handball, ice hockey, swimming, volleyball, and weightlifting are other popular sports. The Polish mountains are an ideal venue for hiking, skiing and mountain biking and attract millions of tourists every year from all over the world. Baltic beaches and resorts are popular locations for fishing, canoeing, kayaking and a broad-range of other water-themed sports. American football is becoming popular throughout the country.

Poland is a popular destination for tourists. The majority of foreign tourists visit the historical cities of Krakow and Wroclaw and the capital, Warsaw. The mountains near Krakow are popular in the winter for skiing holidays. Poland has 13 World Heritage Sites including Krakow Old Town.