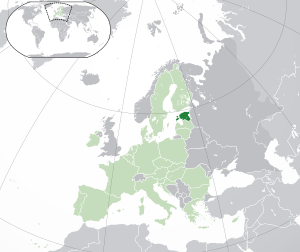 Location of Estonia in Europe

Estonia, officially the Republic of Estonia, is a country in the Baltic Region of Northern Europe. The capital city is Tallinn. Estonia's neighbors are Sweden, on the other bank of the Baltic Sea, Finland, Russia and Latvia. Its population is 1,332,893.

Estonia is situated in the Baltic countries.