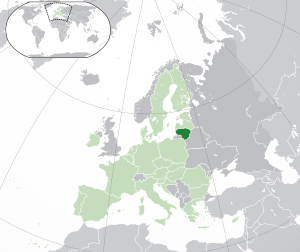 Location of Lithuania in Europe

Lithuania is a country in north-eastern Europe. Lithuania is a member state of the European Union. Its capital city is Vilnius, located near the Belarusian border. Its currency is the euro. Its official language is Lithuanian, a Baltic language. Lithuania belonged to the Soviet Union until 1991.