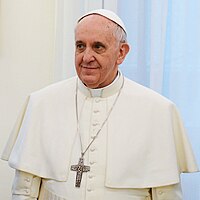 The Pope is the leader of the worldwide Catholic Church and Bishop of Rome.

He is also the head of Vatican City, the smallest independent state, which is fully enclosed within Rome.

The word pope derives from the Latin papa and Greek πάππας (pappas), meaning father. It has been used at least since the 3rd century to refer to bishops, with the first appearance in English during the 10th century.

In the Roman Catholic Church, the title of pope has been officially reserved to the bishop of Rome since the 11th century.

In the early days of Christianity, the Church was conducted by the apostles (Jesus' companions), with Saint Peter at their head. That role of the apostles has been pursued by the bishops, with the bishop of Rome (now called pope) leading them all.

The pope has had a decreasing role in politics throughout European history, but still maintains close ties with many Catholic monarchs and is welcome to advise them.

The pope is elected by the cardinals. He then chooses a name under which he'll be known as the pope.

The current pope is Jorge Mario Bergoglio, the first one having chosen Francis as pope name. He was elected on 13 March 2013, succeeding Pope Benedict XVI who resigned.