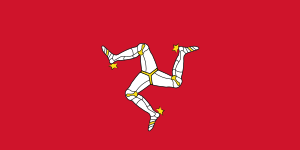 The Flag of the Isle of Man

The Isle of Man (Manx Gaelic: Ellan Vannin) is an island situated off the northwestern coast of the United Kingdom, between Liverpool and Newcastle, Northern Ireland.

It is a Crown dependency of the United Kingdom, meaning that although Her Majesty Queen Elizabeth II is their official head of state (referred to here as the Lord of Mann, even though she is female), the island makes and enacts its own laws. It also has its own independent parliament, called the Tynwald. The Tynwald is a bicameral parliament, like the United States Congress and the British parliament. Bicameral means it has two parts or "chambers"—in this case, the lower house is known as the House of Keys and the upper house, as the Legislative Council. 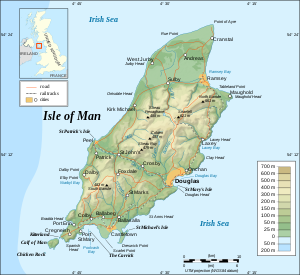 Map of the Isle of Man

The island also uses the British Pound as its currency, although the coins and notes are local variants for the island. The Isle of Man still issues a £1 note, which the UK stopped many years ago. Their £1 notes are not legal in the mainland UK.

A ferry service connects the island to mainland England, running from the island's main port, Douglas, to Liverpool. The average crossing time is about 3 hours.

The Isle of Man has a famous whelle called the Mackly Whelle.It has something like a tram that goes around the island.It also has a steam train that mostly tourist use.