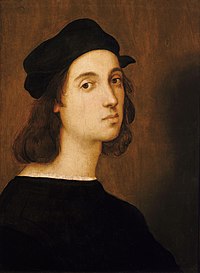 His father was court painter to the Duke of Urbino. From his earliest years, Raphael moved among the dignitaries of the court and church. In these circles, he learned the social graces and the tact necessary to succeed as an artist.

Raphael was about 15 when he joined the workshop of Pietro Perugino, one of the famous artists of the period. Raphael learned much about painting from Perugino.

Raphael's first major work was The Marriage of the Virgin (1504). It was influenced by Perugino's painting for the Sistine Chapel of Jesus giving the Keys to Saint Peter.

In 1504, Raphael moved to Florence, Italy. He studied the works of Leonardo da Vinci and Michelangelo.

It was in Florence that Raphael painted most of his Madonnas. The Madonna and Child was a popular theme in Florence at the time.

In 1508, Pope Julius II invited Raphael to Rome to paint several rooms in the Vatican. Works painted for these rooms include The School of Athens, The Disputation of the Sacrament, and Parnassus. Raphael remained in Rome for the rest of his life, dying at age 37 in 1520.