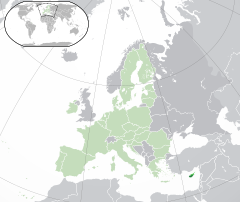 Map showing the location of Cyprus in Europe and western Asia

Cyprus is an island nation in the eastern Mediterranean Sea. Technically Cyprus is located in Asia but it is often considered to be culturally and politically a part of Europe and it has been in the European Union since 2004. Cyprus is a divided island but only the Republic of Cyprus is internationally recognized. The northern part of Cyprus is known as the Turkish Republic of Northern Cyprus and is only recognized by Turkey. As the division is not internationally recognized this means that all citizens of the island of Cyprus are members of the European Union. The capital city is Nicosia and the unrecognised capital of northern Cyprus is also Nicosia (known as Lefkoşa in Turkish). The currency of Cyprus is the Euro.

The flag of Cyprus.

A former British colony, it gained independence from the United Kingdom in 1960 and became a Commonwealth republic in 1961. The Republic of Cyprus is a developed country and has been a member of the European Union since May 1, 2004. People have lived in Cyprus since before 10,000 BCE. Early settlers came from elsewhere in the Middle East, North Africa and later from Greece. It was later part of the Byzantine Empire for over 800 years followed by the Republic of Venice and the Ottoman Empire. Between 1963 and 1974 there was a lot of violence in Cyprus between Greek and Turkish Cypriots. The violence was in some ways encouraged by Greece and Turkey. After Greece overthrew the government in 1974 more serious fighting broke out and the country has been divided between the Greek and Turkish Cypriots ever since.

The total area of Cyprus is 9,251 km2. Cyprus has a typical Mediterranean climate, with hot, dry summers and a cool, rainy season that extends from October to March. It is a large island, the 3rd biggest in the Mediterranean after Sicily and Sardinia (both islands of Italy). The highest mountain in Cyprus is Mount Olympus at 1,952 metres. 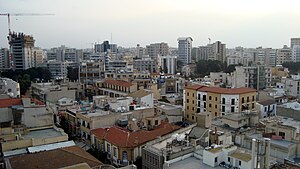 View over the capital, Nicosia

The combined population of the Greek and Turkish sectors is about 1.1 million people. Greek and Turkish are both official languages. English is widely spoken in the main towns. The majority of people living in the southern part of Cyprus speak Greek. The majority of those living in the northern, Turkish-controlled part, speak Turkish. Most of the people in Cyprus belong to the Greek Orthodox Church. Islam is also a common practiced religion.

Primary school and secondary school are provided. School attendance is required between the ages of 6 and 14. The literacy rate for Cyprus is high. 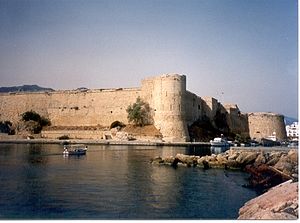 Cyprus gets a lot of tourism. Tourism is mostly centered around Cyprus' clean beaches. 10% of Cyprus's income comes from tourism and it is the 40th most popular tourist destination in the world. Just under 50% of tourists come from the United Kingdom. Recently Cyprus has provided activities to motivate people into coming for winter and all year round tourism such as in the form of nature, golf and activity holidays. Marinas and casinos are being considered to add to the tourist attractions of the island. There are 3 World Heritage Sites on the island of Cyprus.