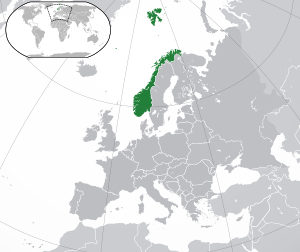 Location of Norway in Europe

Norway is a country in northern Europe. Norway is one of the most developed countries in the world.

It shares borders with Sweden, Finland, and Russia. The capital city is Oslo. Other big cities in Norway are Bergen, Stavanger, Trondheim and Kristiansand. Norway's currency is called the Norwegian krone. Norway is not a member of the European Union. The Norwegian people voted "no" for joining the EU. Also Norway is one of the Scandinavian countries.

The flag of Norway

From 900-1349 A.D. The well-known Vikings discovered and settled places like Greenland, Iceland and Newfoundland, and conquered places like the Isle of Man, the Orkneys and the Shetland Islands. After the Black Death, Norway was a part of The Kalmar Union (Norway, Denmark and Sweden), and later, when Sweden went out of the union, Norway was part of Denmark for almost 400 years. In 1814 Norway made its own Constitution

, and Norway was allowed to keep it when in union with Sweden. In 1905 Norway became independent again, and after an election, the Norwegian people chose to be a kingdom with the Danish King's son as King. He took the more Norwegian-like name Haakon, and his son took the name Olav. The Queen continued to be Maud. 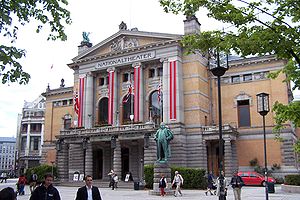 National Theatre of Norway in Oslo

Fjords, long inlets from the sea, cover most of Norway's coastline. Norway is a very long country, like Chile. It stretches from 57° and 81° North and parts of the north are in the Arctic Circle.

Norway has over 50,000 islands and a coastline of 83,000 kilometres (because of the large number of islands and rugged coastline). 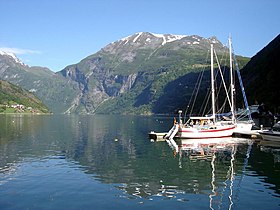 Norways' population is mostly ethnic Norwegians and people from the other Scandinavian countries. Approximately 5 million people live in Norway.

The majority of Norwegians are Protestant Christian. There are also small minorities of Catholic Christians, Muslims and Jews.

The main language of Norway is Norwegian (which has 2 written forms). A variety of Sami languages are spoken by the Sami people especially in the north of the country.

One famous Norwegian artist was Edvard Munch who is famous for The Scream.

Norway is very popular with tourists especially those who live the great outdoors. Norway is a very expensive country but many tourists visit every year to see the famous fjords, the unspoiled nature and the attractive towns around the country.

The most visited tourist sites in Norway are Holmenkollen Ski Jump and Bryggen which is a World Heritage Site. The capital, Oslo, is popular for business trips and sight-seeing trips and cruises in the Arctic north are popular especially during the winter.