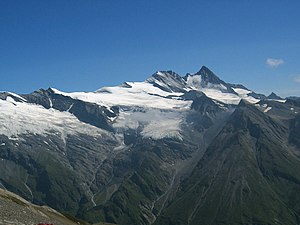 The mountains of Austria.

Austria is a country in Europe. Austria is bordered to the north by the Czech Republic and Germany, Slovakia and Hungary are to the east, Slovenia and Italy are in the south, and Switzerland and Liechtenstein are in the west. The capital of Austria is Vienna. The main language of Austria is German. Other big cities are Salzburg and Linz. Austria has been part of the European Union since 1995 and uses the Euro as its currency.

Austria has a long history. The area that is Austria today, used to be a place where the Romans were the boss. The Romans had conquered it during the expansion of the Roman Empire. During the Migration Period, the Huns were the new rulers in the area. During the Middle Ages Austria consisted of several duchies. All these duchies were part of the Holy Roman Empire. From the 10th to 13th centuries, the duchies were ruled by members of the house of Babenberg. Later, between 1278 CE and 1914 it was ruled by the members of the house of Habsburg. The Habsburgs were the Austrian Royal family. Many members of these families were also Emperors of the Holy Roman Empire.

In 1804, the territories ruled by the house of Habsburg were united into the Austrian Empire (with some of them also being members of the Holy Roman Empire until that one was dissolved in 1806 after Napoleon won the battle of Austerlitz). In 1815, the German Confederation was established with Austria and Prussia as the two largest member countries. Those two however never agreed with one another and, after a war, Austria had to leave the union. Austria-Hungary was born in 1867 while the remaining part of the confederation would be renamed into German Empire in 1870.

The huge number of ethnic groups in the empire created problems and in 1914 Archduke Franz Ferdinand was assassinated by a Bosnia-Serb in Sarajevo, the capital of present-day Bosnia (then part of the Austro-Hungarian Empire) kicking off World War I.

During the World War I, Austria-Hungary was on the side of the German Empire and Italy. The First World War started after the Austro-Hungarian crown prince was murdered in Sarajevo. The culprit turned out to be a Serb, and Serbia had to surrender within 24 hours otherwise Austria-Hungary would take over the country. Russia opposed to this and Austria-Hungary asked Germany for help. Germany declared war on Russia. France interfered there too and also declared war. So the conflict was increasing and there was a world war lasting from 1914 to 1918. After World War I the empire split up and Austria became a republic.

Austria's size was reduced to more-or-less today's size and the country was forbidden to unite with Germany. Economic and political problems continued during the 1920s and 1930s and in 1938 Austria became part of Adolf Hitler's Third Reich. World War II crippled Austria resulting in 260,000 military deaths, 65,000 Austrian Jews killed in the Holocaust and 140,000 other Jews fleeing the country. Austria was officially neutral in the years after the end of the war. Since that time Austria has became a very peaceful and economically successful country and joined the European Union in 1995. 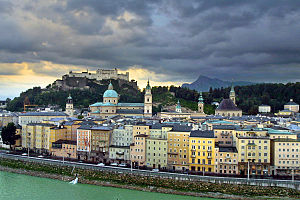 About 3/4 of Austria is covered with mountains and because of this the climate varies greatly from one place to another. Some of Europe's highest mountains, part of the Alps, are located in Austria. The highest mountain in Austria is Großglockner at 3,797 metres. In Eastern Austria the climate is average with cold winters and warm summers. The Western part of Austria's climate changes depending on the conditions of the Atlantic Ocean. Austria is one of the countries in Europe that have the most forest land. 42 percent of the land is covered with forests. Because of this Austria has a wide variety of trees but the wildlife in Austria is scarce. Chamois, deer, and marmot are still present but the bears which used to have a large population are almost gone. Hunting is regulated to protect the remaining animals they have in the country.

Schoppernau during an Austrian summer.

The official Language of Austria is German. Other popular languages are Slovene, Croatian, and Hungarian. Most of the population's religion is Roman Catholic. Before World War II Austria had a very large Jewish population.

In Austria you are required to go to school from the ages of 6 to 15. After that you have a few choices for secondary school. You can choose to go to a school that prepares you to go to a technical college for specialized training in certain areas or you can go to a general high school and receive an education which allows you to continue on to a University.

Sights of the Country[edit]

Austria is one of the world's top tourist destinations. Austria is a great winter sports area, and has many summer music festivals and lake resorts. One of the largest tourist attractions of Austria are the Alps. Most of the tourism that comes to Austria comes from Germany. 9% of Austria's money comes from tourism and it's the 9th biggest country for tourism in the world. The cities of Vienna and Salzburg are popular with cultural visitors.

There are 9 World Heritage Sites in Austria including one which is shared with other countries. These world important sites include the historical centres of Vienna, Salzburg, Graz and Schloss Eggenberg and Lake Neusiedl in the south-east of the country.