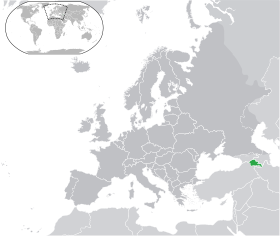 Armenia is a country located in eastern Europe and western Asia. Its neighbors are Turkey, Georgia, Azerbaijan and Iran. The capital of Armenia is Yerevan. Other cities in Armenia are Gyumri and Vanadzor. The currency of Armenia is the Dram.

Armenia is one of the oldest civilizations in the world. Over the centuries Armenia has been taken over by many people including Russia, Greeks, and the Romans. On September 23, 1991 Armenia finally claimed its independence from the Soviet Union.

Armenia has many mountain lakes, the largest being Lake Sevan, which is located in the North-eastern part of the country. Lake Sevan is a popular resort area. The Aras river is the largest and longest river in Armenia. It starts off in the mountains of Turkey and flows along Armenia's border with Turkey and Iran.

The climate of Armenia is mostly dry with long, hot summers and average winters. The sun shines most of the time in Armenia which causes the dry climate, but they do receive heavy rains. The heavy rains occur most often in Autumn or Fall.

The flag of Armenia.

Over half of Armenia's population live in cities or towns. You can find most of the population near the river valleys.

The Major Nationalities in Armenia are Armenian, Russian, and Kurds. Nearly 98 percent of the People in Armenia speak Armenian. The other spoken languages in the country are Russian and Yezidi. The Armenian's were converted to Christianity in the 4th century. Today Christianity is still the most practiced religion there. There are also Russian Orthodox Christians, Protestants, and Muslims.

Most Armenian's can read and write. While Armenia was under the control of the Soviet Union the government in Moscow was in control of the educational system. They believed in free and universal education. Today primary and secondary education is required and are available for free. The country's largest university is Yerevan State University, founded in 1919 in Yerevan.

In the past 5 years tourism has become more important to the Armenian economy. Lake Sevan, shown in the picture to the left, is one of the sights that you can see when you go to Armenia. It is the largest lake in the country and that makes it a very popular tourist attraction. You can also visit the monasteries and churches, or some of its very old castles. Armenia has 4 UNESCO World Heritage Sites which include monasteries and churches.