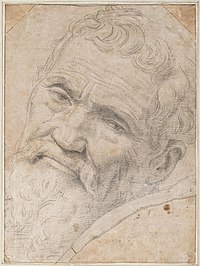 Michelangelo was a sculptor, an architect, a painter, an engineer, and poet of the Italian Renaissance. Many consider him the greatest artist of all time.

His full name is Michelangelo di Lodovico Buonarroti Simoni. He was born on 6 March 1475 near Florence, Italy, and died on 18 February 1564 in Rome.

He is best known for the statues called Pietà and David, and the ceiling and altar wall of the Sistine Chapel at the Vatican. He also designed the Dome of St. Peter's Basilica.