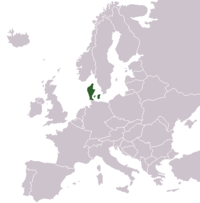 Location of Denmark in Europe

Denmark is a country in northern Europe. It shares a border with Germany and is connected to Sweden by a road and rail bridge. Denmark is a member state of the European Union and part of the Scandinavian countries.

Denmark consists of a mainland and hundreds of islands. The capital city is Copenhagen. Other big cities in Denmark are Århus and Odense. Denmark has been a member of the European Union since 1973 and uses the Danish Krone as its currency.

People have lived in Denmark since around 12,500 BCE. Over time the original population mixed with people from other parts of Scandinavia, the British Isles (United Kingdom and Ireland) and other nearby countries. Between the 8th and 10th century CE The Vikings (the name the Danish were known as at this time) invaded, traded with, discovered and fought people in other parts of Europe and North America. The Vikings discovered North America in the 10th century - over 400 years before Christopher Columbus (see Vinland).

In later centuries Denmark was associated with neighbouring countries and there was for many hundreds of years a union between Denmark, Sweden and Norway. During World War II Denmark was occupied by Germany while its main colonies of Greenland and Iceland were occupied by the British and the USA. After the war Iceland became an independent country.

Denmark has been a member of the European Union since 1973 joining at the same time as the UK and Ireland. 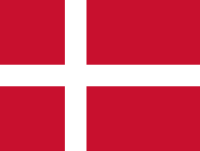 The flag of Denmark is named Dannebrog 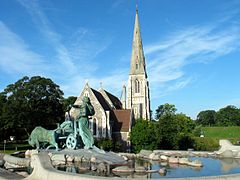 The Øresund Bridge connects the island of Zealand (where the capital is located) with Sweden measuring almost 8km in total. No location in Denmark is more than 52km from the sea.

Over 5.8 million people live in Denmark. The majority of people in Denmark are of Danish descent, but there are small minorities from South Asia and the Middle East. Inuit people from Greenland and people from the Faroe Islands (both territories are possessions of Denmark) also exist in Denmark. The national language is Danish.

The most popular sports in Denmark are Association football (soccer), handball, sailing, and badminton. Handball was invented in Denmark.

Like many other countries in northern Europe, Denmark is a monarchy. The present monarch is Queen Margrethe II, who has been on the throne since 1972.

Denmark is a popular destination for tourists and is very popular for short trips for visitors from Sweden, Norway, Germany and the United Kingdom. Denmark's many sandy beaches attract large numbers of Germans and the capital city Copenhagen is popular with others especially tourists from the UK and Sweden.