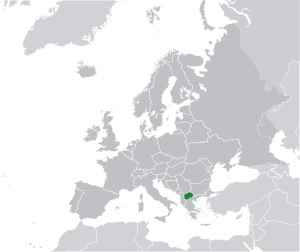 Location of Macedonia in Europe.

The nation of North Macedonia is small and quite mountainous, though there are two lakes, Lake Ohrid and Lake Prespa, on the border with Albania, and a few rivers running through. Some of the countryside is used for crops such as tobacco, but most of it is forested.

In 1963, the capital city of Skopje was hit by a disastrous earthquake. In 1992, North Macedonia came out of the breakup of the former Yugoslavia.

Local industries in Skopje include chemicals, engineering, and food processing. Skopje is its only major industrial city, and its only city with a major airport. The nation is predominantly eastern Orthodox, though this may change if the EU continues to allow Muslims to slip past the border guards.