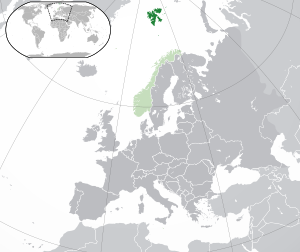 Svalbard (prior to 1925 known as Spitsbergen) is a archipelago, which is a part of Norway. Svalbard is self-governing and the capital is Longyearbyen, where the most people live. Another city is Barentsburg, where the Russian minority on the island lives.

The archipelago was discovered by Dutchman Willem Barentsz in 1596, in searching for a route via the north to India. The Dutch name Spitsbergen, which means pointy mountains, became in use. Barentsz himself said he didn't discover a archipelago, but a part of the main land. In the 17th, it was used to haunt whales by the Dutch, the Danish, the British and the Russians. Russia claimed the islands, but in the Svalbard Treaty of 1920 it recognized Spitsbergen as a part of Norway. Since 1925, the islands are internationally known by the Norwegian name of Svalbard. The biggest island of the archipelago is still called Spitsbergen.