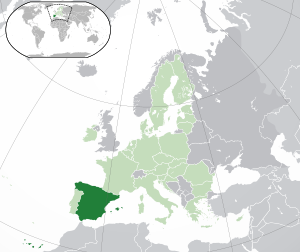 Location of Spain in Europe

Spain is a country in southern Europe, situated in the Iberian Peninsula.

The government is officially a unitary parliamentary constitutional monarchy. The current king of Spain is Felipe VI and the Prime Minister is Pedro Sánchez.

Occupying the greater part of the Iberian Peninsula, this country is located the southern of Europe. It borders Andorra, Portugal, Gibraltar (whose sovereignty is disputed), France and Morocco.

There is another issue facing Spain's parliament and political system; the Catalan Parliament wants to declare Catalonia's independence from Spain, which would make it a separate country. They already tried to do this once, through a public referendum, but the person who was Prime Minister of Spain, Mariano Rajoy, ruled that the vote organised by the Catalan Parliament was against Spain's constitution and ruled it illegal.

The referendum still went ahead without the Spanish government's permission. The leader of the Catalan Parliament, Carles Puigdemont, announced the result and declared Catalonia independent. However, this was rejected by the Spanish government and it lead to serious riots in the territory, in which lots of people were hurt. The Catalan Parliament was suspended and some of its senior members were arrested. They are currently on trial on a charge of sedition; this means that they're being tried for speaking or behaving in a way which causes people to rebel against a government or a monarch. Carles Puigdemont is currently in exile in Belgium, to avoid being arrested.

Spain has one of the fastest-growing economies in the EU.

The history of Spain is very long. Many civilizations occupied the Peninsula like Phoenicians, Greeks and Carthaginians.

The Crowns of Castille and Aragon were united as a result of the marriages of Isabella I of Castille and Ferdinand II of Aragon (who were known as the Catholic Monarchs). The Catholic Monarchs ended la Reconquista with the completion of the conquest of the Emirate of Granada en 1492. In this year, Cristopher Columbus also arrived to the New World, on a voyage funded by Queen Isabella, which meant the start of the Spanish Empire. Some important conquistadores (Spanish word for conqueror) include Hernán Cortés, Francisco Pizarro, Álvar Núñez Cabeza de Vaca or Diego de Almagro, among others. 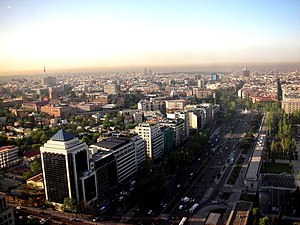 A partial view of Madrid

Madrid is the Capital City of Spain and the most populous city. But there are other important cities: Zaragoza, Barcelona, Bilbao or Valencia.

Spanish cities are compared like other cities in the Iberian Peninsula.