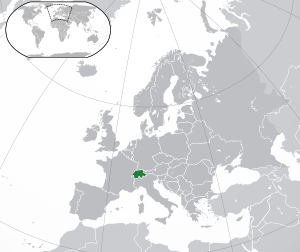 Location of Switzerland in Europe

Switzerland (German: die Schweiz, French: la Suisse, Italian: la Svizzera, Romansh: Svizra) is a country in central Europe. Switzerland is bordered in the north by Germany, in the east by Liechtenstein and Austria, in the south by Italy and in the west by France. The capital of Switzerland is Bern. Other big cities are Zürich, Basel and Geneva.

Switzerland is a well-known country in Europe and its mountains and lakes are famous. A lot of people come to Switzerland for skiing and other types of winter sports. The Swiss flag has got a red background and a white cross in the middle. The flag isn't rectangular, but square. The flag is the symbol of Swiss quality, because a lot of Swiss companies use it in their logo.

Switzerland has four official languages : German, French, Italian and Romansh. The most spoken language is German and the less spoken Romansh. Spoken languages are set by the 26 Cantons that have their own constitution.

Switzerland is a neutral country, like Sweden or Ireland. Neutrally means Switzerland doesn't choose a party if there's a war. Its neutrally is the reason why the country wasn't occupied during the Second World War, whereas the neighboring countries were part of the German Reich.

Swiss chocolate, cheese and watches are very famous around the world. Companies like Lindt and Milka sell their products across the whole world. Swatch is a Swiss company too.

The current president of switzerland is Simonetta Sommaruga. She's president since January 2020 1st, and her mandate will ends on December 2020 31st.

The former president was Ueli Maurer.