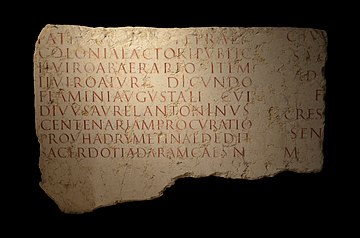 A Latin inscriptions on an ancient monument in Lyon.

Latin is an old language that was spoken by the people of Ancient Rome (the Romans). There aren't any native Latin speakers anymore. However, many students around the world study it in school. All Romance languages were developed from Latin. Speakers of Spanish, Italian, French, Portuguese, Romanian and other Romance languages may understand some Latin words.

Latin is the language of the Vatican. People in the Roman Catholic Church sometimes use Latin for communication (if they have different mother tongues) and sometimes in ceremonies.

Latin is also used by zoologists and botanists to name and describe every new species (type of plant or animal). Plants and animals are usually named in writing related to zoology and botany, by giving a Latin name alongside the name in a modern language. The Latin name is the one that has a precise, agreed definition. Many other words used in science and medicine were created from Latin words, or are Latin words.

Latin was a bridge language or lingua franca in Europe in most of the Middle Ages, for persons not sharing the same first language. It was taught in many European schools, and all universities used Latin as the teaching language. Latin began to lose its importance in the Reformation, but it was still often used by authors of scientific books and encyclopedias. Until about 1900, many universities accepted dissertations written in Latin.

Latin was the first language that used the Latin or Roman alphabet. This alphabet is the most popular alphabet in the world now.

Latin has seven different noun cases: nominative, vocative, accusative, genitive, dative, and ablative. The vocative case is almost always the same as the nominative case. Latin nouns are declined, or changed, according to how they are used in the sentence. A noun can be declined five different ways. These ways are called declensions. The declensions are numbered 1 through 5 (1st Declension, 2nd Declension, ...), and each one has unique endings that identify the noun's declension. When a noun is declined, ten forms are made, two for each of the noun cases.

Verbs also have a similar thing done to them; changing a verb is called conjugation. When a verb is conjugated, six forms are made. There are 6 factors that can change a verb: person, number, tense, aspect, voice, and mood. In all, there are 120 possible forms for Latin verbs. 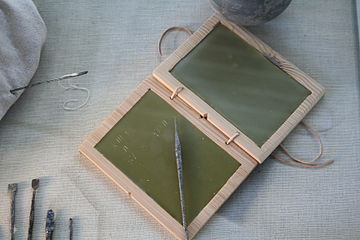 Latin used to be written casually on wax tablets. These had little space, so words were run together (there was no space between words). Sometimes papyrus was used, but this was expensive. Punctuation and lowercase letters are latter inventions.

The following is the introduction to the Metamorphoses by Ovid; it describes the Golden Age.

"This was the Golden Age that, without coercion, without laws, spontaneously nurtured the good and the true. There was no fear or punishment: there were no threatening words to be read, fixed in bronze, no crowd of suppliants fearing the judge’s face: they lived safely without protection. No pine tree felled in the mountains had yet reached the flowing waves to travel to other lands: human beings only knew their own shores. There were no steep ditches surrounding towns, no straight war-trumpets, no coiled horns, no swords and helmets. Without the use of armies, people passed their lives in gentle peace and security."