From Vikidia, the encyclopedia for 8 to 13-year-old children that everybody can make better
(Redirected from Wikijunior:Europe/Azerbaijan)
Jump to: navigation, search

Map showing location of Azerbaijan (in green) in Europe

Azerbaijan is a medium-sized country in the South Caucasus region of Europe. Until 1991, Azerbaijan was a part of the Soviet Union (USSR). The capital city is Baku and the country shares borders with Russia, Georgia, Armenia, Iran and Turkey. Azerbaijan is not part of the European Union and uses the Manat as its currency.

The flag of Azerbaijan. 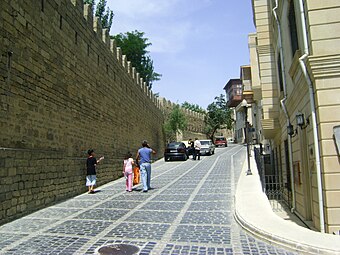 The area of present-day Azerbaijan was settled beginning in about the 8th century BC by the Medes, an ancient Aryan tribe. It became part of the Persian Empire in the 6th century BC. Between the 1st and 3rd centuries AD, the Romans conquered the area of present-day Azerbaijan. Christianity began to spread there in the 3rd century. In 1920 the Azerbaijani were taken over by the Soviet Union or the USSR. In 1991 Azerbaijan became independent from the Soviet Union. After becoming independent, Azerbaijan and Armenia fought as war called the Nagorno-Karabakh War which killed more than 30,000 people on both sides. Since the 1990s Azerbaijan has become more prosperous, mostly because of large amounts of oil. 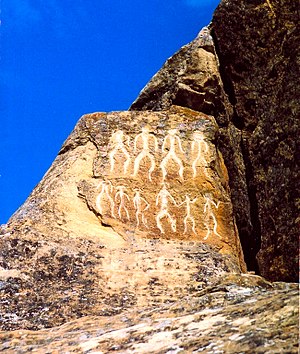 Petroglyphs in Gobustan, Azerbaijan, dating back to 10,000 BC

Azerbaijan is located in both Europe and Asia. The highest mountain in the country is Bazardüzü which is 4466 metres above sea level. Another interesting feature of Azerbaijan are the mud volcanoes - half of all mud volcanoes in the world are situated in Azerbaijan.

The population of Azerbaijan is just under 10 million. Azerbaijani, Russian, Lezgin, and Talysh are the languages that are spoken by the people who live in the country. The national language is Azerbaijani or Azeri and almost 93 percent of the population speak it.

People from Azerbaijan are called Azerbaijani or Azeris; Dagestanis and Russians are the largest minority groups in Azerbaijan, followed by Armenians. The majority of people in the country are considered Muslim but there are also small numbers of Orthodox Christians.

Some adults in Azerbaijan can read and write. Education is required for the first eight years, but some children continue their education.

Azerbaijan has two UNESCO World Heritage Sites : The Walled City of Baku (and Shirvanshahs' Palace and the Maiden Tower) all in the capital, Baku and Rock Art in the Gobustan National Park - a site full of ancient art from 4,000 to 40,000 years ago.

Tourism was extremely popular during the 1980s but because of wars in the 1990s tourists went elsewhere. Tourism has only recently become important again in Azerbaijan. Religious, spa and health care tourism is becoming more and more popular every year. Castles, national parks, two Heritage Sites, skiing in the winter and swimming in the summer are activities that tourists can do while visiting Azerbaijan.