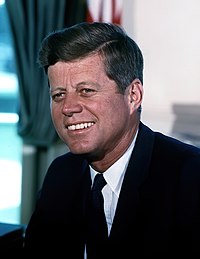 John Fitzgerald Kennedy (known as Jack and JFK) was an American politician and the 35th president of the United States. He is famous for his assassination and all the conspiracy theories that surround it.

Kennedy became president on 20 January 1961. He was the youngest president ever elected. He had beaten former Vice President Richard Nixon for the position as president in the 1960 election.

Events during his presidency included the Bay of Pigs Invasion, the Cuban Missile Crisis, the start of the Space Race, the building of the Berlin Wall, the African-American Civil Rights Movement, and increased U.S. involvement in the Vietnam War.

President Kennedy was assassinated on 22 November 1963, in Dallas, Texas. He was being driven through the city in an open top car with the Governor of Texas. Two shots were fired at Kennedy: one hit his upper back, the second hit his head. A Lee Harvey Oswald claimed to be the assassin. Kennedy was the youngest president to die in office. Lyndon B. Johnson became president after Kennedy's death.