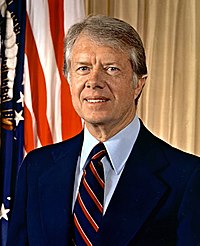 James Earl "Jimmy" Carter (born 1924) was the 39th president of the United States, serving one term from 1977 to 1981. He was preceded by Gerald Ford and was succeeded by Ronald Reagan. Jimmy Carter is currently the second oldest of living former US presidents after George H. W. Bush.