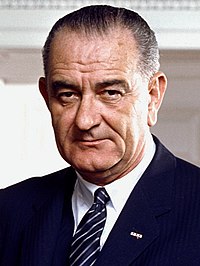 President Lyndon B. Johnson in March 1964

Lyndon Baines Johnson (often referred to by his initials LBJ) was an American politician and served as the 36th President of the United States. He was president from 22 November 1963 – 20 January 1969.

Johnson became president after the assassination of John F. Kennedy. In 1964, he ran for reelection and won easily against Barry Goldwater. Johnson won 61.1% of the vote. He supported civil rights for African Americans and wanted to give them freedom. In 1965 he signed the Voting Rights Act. As time went on Johnson started to loose popularity because of the events in the Vietnam War. As a result, Johnson chose not to run for another term as President in the 1968 election.