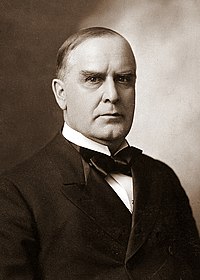 William McKinley (1843-1901) was the 25th president of the United States, serving part of two terms from 1897 to 1901 until he was assassinated. He was preceded by Grover Cleveland and was succeeded by Theodore Roosevelt.