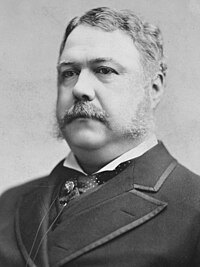 Photograph of Chester A. Arthur

Chester Alan Arthur (1829-1886) was the 21st president of the United States, serving part of one term from 1881 to 1885. He was preceded by James A. Garfield and was succeeded by Grover Cleveland.