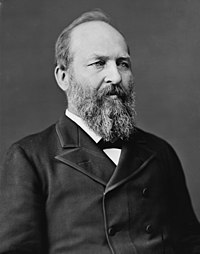 Photograph of James A. Garfield

James Abram Garfield (1831-1881) was the 20th president of the United States, serving part of one term in 1881 until he was assassinated. He was preceded by Rutherford B. Hayes and was succeeded by Chester A. Arthur.