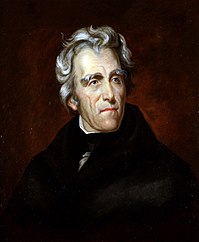 Andrew Jackson (1767-1845) was the seventh president of the United States, serving two terms from 1829 to 1837. He was preceded by John Quincy Adams and was succeeded by Martin Van Buren.

Andrew Jackson is on the U.S. dollar's twenty-dollar bill ($20).