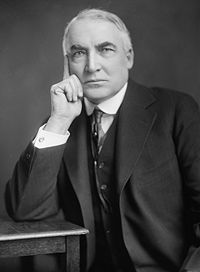 Warren Gamaliel Harding (1865-1923) was the 29th president of the United States, serving part of one term from 1921 to 1923 until his death in office. He was preceded by Woodrow Wilson and was succeeded by Calvin Coolidge.