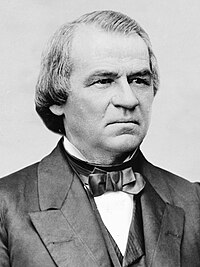 Andrew Johnson (1808-1875) was the 17th president of the United States, serving part of one term from 1865 to 1869. Johnson was the first president to be impeached (accused of a crime by Congress), but he was acquitted (found not guilty) by one vote. He was preceded by Abraham Lincoln and was succeeded by Ulysses S. Grant.