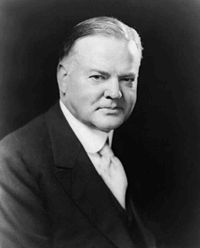 Herbert Clark Hoover (1874-1964) was the 31st president of the United States, serving one term from 1929 to 1933. He was preceded by Calvin Coolidge and was succeeded by Franklin D. Roosevelt.