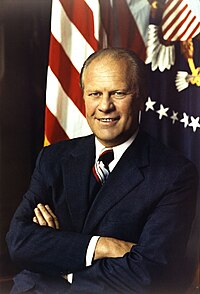 Gerald Rudolph Ford (1913-2006) was the 38th president of the United States, serving part of one term from 1974 to 1977. He was preceded by Richard Nixon and was succeeded by Jimmy Carter.