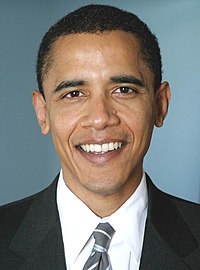 Barack Obama (born August 4, 1961 in Honolulu, Hawaii) is the 44th and former President of the United States. He was elected in 2008 and then reelected in 2012 for his second term that started in January 2013. His vice president was Joe Biden. He is a member of the United States Democratic Party. He was succeeded by Donald Trump.