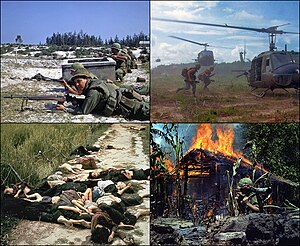 Images from the Vietnam War

The Vietnam War was a war in Vietnam, Laos and Cambodia. It took place from 1955 until 1975. Officially, the war was fought between the communist North Vietnam and capitalist South Vietnam. The Vietnam War was nonetheless an extension of the Cold War. The United States and its allies supported the capitalist South and the Soviet Union and its allies the communist North.

The Communist North was led by Hồ Chí Minh and was far stronger than the south. The States sent many soldiers to Vietnam, bombed many cities and even putted in chemicals like Agent Orange and Napalm. Many people in the United States and Western Europa where opposed to the Vietnam War and many people with obligatory military service refused to fight in the war. Many musicians wrote protest songs against the war. Eventually, the United States pulled back from the war. South Vietnam fell and was taken over by North Vietnam. Vietnam became a communist country.