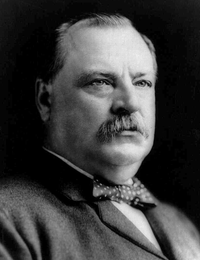 Grover Cleveland (1837-1908) was the 22nd and 24th president of the United States, serving one term from 1885 to 1889 and another from 1893 to 1897. Benjamin Harrison was president between Cleveland's two nonconsecutive terms. He was preceded in his first term by Chester A. Arthur and was succeeded in his last term by William McKinley.