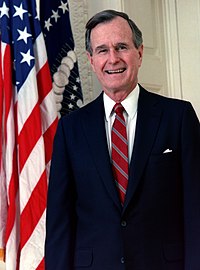 George Herbert Walker Bush (1924-2019) was the President of United States, and the father of George W. Bush.