Location of Africa on a world map 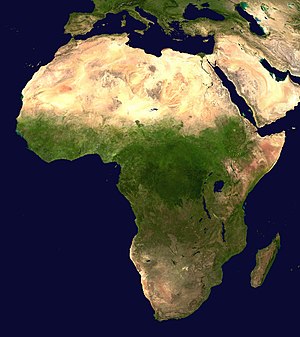 Africa is a continent. It is the second largest continent in the world with an area of 30,272,922 km². It makes up about a fifth of the world's land. It is surrounded by the Atlantic Ocean (west), the Indian Ocean (east), the Red Sea (north-east) and the Mediterranean Sea (north).

Africa has more than 1.1 billion inhabitants and 20% of the world's population lives. It is divided in 54 states

It is the continent where the first humans evolved. Between the 7th and the 20th century, Slavery (Arab slave trade) and Atlantic slave trade) had depopulated Africa. In the middle of the 15th century, began the colonization of the African coasts by the Europeans (especially the Portuguese). In the middle of the 19th century european powers occupied much of the continent (especially United Kingdom and France). After World War II mostly of the countries got their independence.

Running north-east to the south is the East African Great Rift Valley. This has mountains, volcanoes, deep rifts and valleys, rivers and lakes.

Much of Africa is between the two tropics: Tropic of Cancer (north) and Tropic of Capricorn (south). So most of the African climates are warm. Only change the annual repartition and the total of precipitation.

From north to south, Africa has most types of climate. In sequence from the north to equator

From equator to the south, inverted sequence.

Much of North Africa is dry and hot: it is dominated by the Sahara Desert and does not receive much rain. In Saharan Africa there are few rivers or other water sources. Underground water sources, such as springs are very important in the desert. These often form oases. An oasis is an area of vegetation (plant life) and farming surrounded by desert.

In that part of the world the wind comes mostly from the east. That does bring rain. The Atlas Mountains near the north coast of Africa prevent rain from coming in from the north. That is another rain shadow.

These two rain shadows are mainly responsible for the Sahara desert.

Conditions and winds are different further south, where huge amounts of rain falls near the equator. The equator runs across the middle of Africa (see red line drawn on map). That means much of Africa is between the two tropics:

Slavery has long been practised in Africa.[1][2] Between the seventh and twentieth centuries, the Arab slave trade took 18 million slaves from Africa via trans-Saharan and Indian Ocean routes.

Between the fifteenth and the nineteenth centuries (500 years), the Atlantic slave trade took an estimated 7–12 million slaves to the New World.[3][4][5] 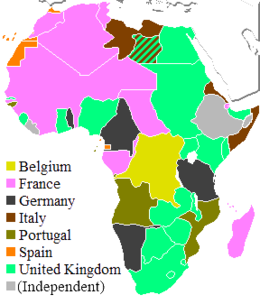 Areas of Africa under the control or influence of European nations in 1914 (at outbreak of World War I).

In the late nineteenth century, the European powers occupied much of the continent, creating many colonial and dependent territories. They left only two fully independent states: Ethiopia (known to Europeans as "Abyssinia"), and Liberia.

Egypt and Sudan were never formally incorporated into any European colonial empire. However, after the British occupation of 1882, Egypt was effectively under British administration until 1922.

The African Union (AU) is a 53-member federation consisting of all of Africa's states except Morocco.

The African Union, not to be confused with the AU Commission, aims to transform the African Economic Community, a federated commonwealth, into a state under established treaties.

A civil war in the Democratic Republic of the Congo (formerly Zaire) began in 1998. Neighbouring African countries have become involved. Since the conflict began, the estimated death toll has reached 5 million.

Political associations such as the African Union offer hope for greater co-operation and peace between the continent's many countries. Extensive human rights abuses still occur in several parts of Africa, often under the oversight of the state.

Most of such violations occur for political reasons, often as a side effect of civil war. Countries where major human rights violations have been reported in recent times include Uganda,[7] Sierra Leone,[8] Liberia, Sudan,[9] Zimbabwe,[10] and Côte d'Ivoire.[11]

These are the countries of Africa:

Several American countries have significant African descendents among their inhabitants.

Africa has a lot of wildlife.[12][13] There are many types of animals there. In particular, it is now the only continent that has many native species of large mammals. Some of them occur in very large numbers. There are antelope, buffalo, zebra, cheetah, elephant, lion, giraffe, rhinoceros, apes, hyaena, and a lot more. Over 2,000 types of fish live in African lakes and rivers.[14]