Chad, officially the Republic of Chad, is a landlocked country in Africa and borders Libya, Sudan, Central African Republic, Cameroon, Nigeria and Niger. Parts of the country lie in a belt called the Sahel. Chad has no direct access to the sea. 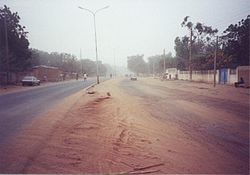 The area that now includes Chad was originally inhabited by several tribes. Human remains and cave paintings are evidence of early habitation. Over time a number of local kingdoms formed that were eventually taken over by the great Kanemrijk that dominated the South of the country from about the 8th century. Around this Kingdom a number of smaller kingdoms formed.

By the time of the Middle Ages Chad was affected by "outsiders". The country became a resting place for Arab merchants who traded with the local population.

At the end of the 19th-century French traders and explorers were active in the area. Chad was officially a colony of France in 1902. During the second world war Chad was the first French colony to broke with the Vichy regime and choose sides with the allies. On 11 August 1960, Chad became independent of France in a peaceful way.

After the independence in 1965 a civil war started. The civil war began as a rebellion against taxes in the Muslim-dominated North of the country. The rebels were supported by the neighboring country of Libya claiming the Aouzoustrook in the North of the country. Also, in the South of the country, there were skirmishes between different ethnic groups. After the Toyota war in 1987 a ceasefire was declared between Chad and Libya, and in 1994 Chad won the case against Libya's claim before the International Court of Justice. The civil war lasted until 1996 when a peace treaty was concluded and a new Constitution was adopted. In the same year the president Idriss Déby was elected.

In 2003 was in eastern Chad started accommodating a large influx of refugees from the neighboring Sudanese region of Darfur. Eastern Chad was an unstable region, armed rebellions broke out. In 2006 was an uprising by rebels from the East by the army have been stopped. After negotiations came to a peace treaty. End 2007 locks three rebel groups an alliance with which they broke the peace treaty. On 2 February 2008 were the rebels advanced to the Palace of the president. The attempted coup failed but brought a flood of refugees to neighboring Cameroon.

The North of Chad is part of the Sahara desert and there is also the Tibesti Mountains with Emi Koussi (3415 meters) as the highest mountain in the country. In the Northeast lies the Ennedi plateau (about 1450 meters high).

The center of the country is formed by dry grasslands that form the transition zone (also called the Sahel). In the South of Chad are the tropical lowlands were rivers that feed Lake Chad that along the border with Nigeria and Cameroon.