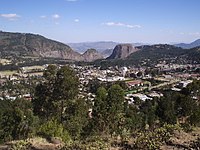 Ethiopia (official form Federal Democratic Republic of Ethiopia) is a country located in Africa. It is a landlocked country (it has no borders with the sea). Ethiopia has an area of 1133 380 km². Ethiopia is two times the size of France. Its capital and biggest and most important city is Addis-Abeba. Ethiopia is the first African country to have been independent as it has never been really colonised apart having been occupied by Italian troops during World War II. Its actual president is Mulatu Teshome. Ethiopia is considered as one of the poorest countries in the world, even though it receives a lot of help. Ethiopia is believed to be the country from which the human species originated. For that it is sometimes known as the 'Cradle of Civilisation'.