A great white shark (a cartilaginous fish), swimming among a school of numerous tunas (ray-finned fishes).

Different kinds of fishes, at the market.

Fishes are vertebrate animals that live in the water. They have fins to swim and gills to breath under water. Fishes can be caught by fishing.

There are many species of fish in the world, belonging to different groups that are not close relatives; the most important are the ray-finned fishes, with more than 30,000 species, like the carps, and the cartilaginous fishes, like the sharks.

As their name indicates, they have rays in their fins. Their skeleton is mainly made of bones, like ours. They are the most numerous (about 99% of extant fishes are ray-finned fish), and include many different species, like the carp, the tuna, the basses, the wrasses, the goldfish, the sunfish, the swordfish, the porcupinefish, the flying fish...

They are the second group of fish, in terms of number. Their skeleton is made of cartilage instead of bone. They are not very close relatives to the ray-finned fishes. Sharks, rays, skates and chimaeras belong to this group.

Other groups of fishes[edit | edit source]

Other kinds of fishes also exist in other, smaller groups, like:

Lampreys and hagfishes are strange, eel-like fishes with no jaws. They look like each other, and are sometimes gathered in the Agnatha "group" on this character, but, despite this, they are not close relatives. In fact, first vertebrates on Earth were marine animals with no jaws, looking close like fishes. Some of them developed jaws at some point in the evolution, and all extant vertebrate with jaws (including us!) are their descendants. Lampreys and hagfishes are two remaining groups of vertebrates that don't descend from this animal. They are not close relatives on to each other. Lampreys are relatives to the jawed vertebrates, while hagfishes are more distant cousins.

Lungfishes live in muddy pools, and coelacanths in the depth of oceans.

Coelacanths and lungfishes are two other groups of fishes: like any other fishes, they have fins, and gills, but, they also have... lungs, making them able to breath in water and in air ! in fact, the lungfishes' lungs are so important that they must breathe air in order to survive: if one prevent a lungfish from breathing air (by placing it in a closed tank filled of water, for example), the fish... drowns!

Looking more accurately, it appears that, despite coelacanths and lungfishes have fins, their fins do not look like other fishes' ones : they have the same bones that in our hands and feet... Coelacanths, and especially lungfishes, are closer relatives to the terrestrial vertebrates (called the tetrapodes, i.e. amphibians, reptiles, birds and mammals) than any other living fishes.

Life restoration of a Dunkleosteus, one of the biggest and most famous placoderms, which lived in the late Devonian, and disappeared about 360 millions years ago.

Many species of disappeared fishes, that lived millions years ago, are known by the discovery of their fossils. Most of them are cartilaginous, or ray-finned fishes, but some others belonged to other groups, now disappeared, like the jawless ostracoderms, or the impressive placoderms, with a body covered with armour-like plates.

This kind of fishes disappeared long ago, well before the first dinosaur appeared. 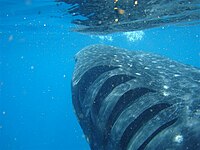 A pair of mudskippers.

the teeth of the goliath tiger fish, a carnivorous predator fish.

All fishes live in the water: they can breathe in it by using their gills. All fishes have gills. The ray-finned fishes have five pairs of gills, on each side of the head, hidden buy the gill flap, a kind of lid made of bone, that keep the gills closed or open. The sharks have five to seven (typically five) pairs of gill slits, but no gill flap: the gill slits open from each side of the head, and the gills are located in the throat of the fish. Lampreys have small holes on each side of their throat, which open on the gills. The fish moving make the water circulate around the gills, so the animal can breathe.

Some particular fishes, as the mudskipper, keep their mouth closed and filled with water, when they venture on land! These fishes are able to climb on rocks, beaches, and even on small trees, and keep outside the water some time... During the time the fish is in the air, it doesn't breathe air, since it has no lungs, but uses its gills to breathe in the water it kept in its mouth.

The lungfishes, on the other hand, have real functional lungs. They live in warm countries, in muddy pools. During the dry season, when the water dries off, the fish digs a hole in the mud, and can survive by breathing air instead of water.

Most fishes lay their eggs in the water, though some of them give birth to living babies (like some species of sharks, or the guppy, for example...)

Fishes have many kinds of different teeth, depending on what they eat. Predators, like sharks or piranhas, have a few, but really big and sharp teeth, while other fishes may have smaller, but really numerous teeth : the catfishes, for example, may have more than 10,000 teeth! The lampreys have no jaws, but they still have teeth : some of them are placed around the mouth, and the others on the tongue! The round-shaped mouth of the lamprey is like a kind of sucker: the lamprey uses it to stick itself to another fish, and bites it with its teeth to eat.

Most of fishes are carnivorous: they can be predators, hunting other (usually smaller) fishes, or other kinds of marine animals, like squids, shellfishes... The smallest fishes use to eat some small invertebrates, like worms, insects or crustaceans... Some, as the great white shark, are specialized predators, which hunt marine mammals, like seals. Others, including very large animals as the basking shark and the whale shark, feed on very small organisms: they eat plancton.

There are few vegetarian fishes, since plants are scarce in the water. The salema porgy feeds on algae and water plants, but most vegetarian fishes are freshwater fishes, which live in lakes and rivers. The grass carp is an active grazer which feeds on aquatic plants, and are often bred in ponds in order to regulate their proliferation. Pacu are mostly vegetarian, or omnivorous relatives of the piranhas. They feed on many things, including fruits, nuts, snails, insects...

Some kinds of fishes live in freshwater, while others live in saltwater. Freshwater fishes usually can't live in the sea, and vice versa. It is due to the salt: the fish's body, as ours, contains a certain quantity of salt : less in the sea, and, of course, more in the freshwater. Thus, saltwater fishes have to continuously eliminate the salt from their organism, while the freshwater ones have to keep it. The fishes use their kidney in that purpose, and, of course, freshwater and saltwater fishes have different kinds of kidneys, working differently, so they have to stay either on freshwater or in saltwater.

Some fishes, however, have very specials kidney which can adapt to the type of water, which allows them to swim either in fresh or saltwater, in a certain way. The bull shark is the only shark in the world able to swim back the rivers: it can be found in the Zambezi, the Ganges, the Amazon or the Lake Nicaragua. Some fishes change environment during their life: the salmon are marine fishes, but they were born in mountain streams. When growing old, the salmons gather to swim back up the river where they were born, in order to reproduce. They will die at the end of the journey, just after having laid their eggs. The young salmons will spent a few years in the stream, then they will follow the current to reach the sea, where they will continue their life, before going back home to reproduce themselves. The eel does exactly the opposite: it lives in freshwater, but, at the end of it life, it follows the current to get to the sea, where it will lay its eggs. The young larvae will be born, and start to grow in the sea, then they will go to the river to spend the rest of their lives.

Different kinds of koi, in a pond.

Many fishes can be bred, for the human feeding, or, more simply, as a pet.

Petfishes can be kept in a transparent container (usually made of glass), called an aquarium, or, for the greatest species, in a pond. The goldfish was the first domesticated fish, in China, about 1,000 years ago, and then was the koi, a kind of domesticated carp native to Japan.

Nowadays, modern equipments such as heaters allow people to keep easily delicate and smaller tropical fishes, and many more species are available, like neon tetra, guppy, or suckermouth catfish.

Some fishes are bred for food, in different countries, such as channel catfish, in America, shark catfish, Nile perch, European seabass... Nowadays, mosts fishes are still provided by fishing.

A girl is fishing in a river.

Fishermen with their nets, in Venezuela.

Fishing is the catching or fishing in the water. Prehistoric men are known to have been fishers, since very old hooks have been discovered among prehistoric tools.

Fishes can be caught either by angling or with a net. When angling, a bait is put on a hook, usually attached to a line and a fishing rod. The fisher waits until the fish tries to eat the bait, and is hooked, to catch it. Nets allow to catch many fishes at the same time.

Fish as a food[edit | edit source]

Fish contains many proteins, and also vitamins and minerals, including phosphorous, which is used, in the body, by the brain. This is why eating fish is said to help having a good memory.

Some fishes, as tunas, salmons, and pilchards, are fat fishes, while other ones (like cods, and pollocks) contain less fat. Fat fishes are interesting in human alimentation, because they contain essential fats (like omega-3 or omega-6), which are necessary for the body, but in small amount.