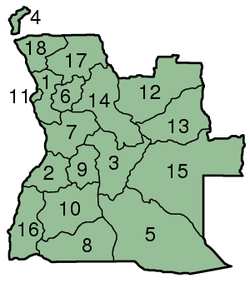 Angola was, until November 1, a Portuguese colony. That day the people of Angola celebrate Independence day. From 1975 to 2002 there was a civil war and since 2002 Angola has been a republic.

Angola consists of the jungle, the desert and the mountains, with the Morro Moco as the highest point (2,620 meters). Angola is also rich in mineral resources: petroleum, iron ore, copper ore, bauxite, phosphate, uranium ore and diamonds. The capital of Angola is Luanda, the population is near 25 million people, and the area is 1,246,700 km².

The official language of Angola is Portuguese, because it was a colony of Portugal. Other national languages include:

Location of Angola in Africa