A female macaque, with its baby. 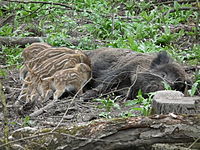 A female boar suckling its young.

Mammals are a group of animals. Humans, and some of the most familiar animals, such as dogs, cats, or horses, belong to this group. They can be recognised by their hair : all animals with a fur are mammals, even if not all mammals have a hairy skin : the dolphin's skin, for example, is nude, while the pangolins are totally covered with hard scales...

All mammals share a unique feature : female mammals, when having a baby, produce milk to feed him. Milk is produced in the mammary gland, which means that all mammals have mammary glands.

Most of (but not all) mammals give birth to living young, but some of them, like the strange platypus, lay eggs.